Would you buy a Spanish new build home? How developers are trying to put past problems to rest and tempt British buyers again

By Myra Butterworth For MailOnline

A combination of sun, sea and golf has always drawn Britons to consider Spain‘s Costa del Sol as a location to buy an overseas property.

But the number of Spanish homes being sold to British buyers plummeted during the global financial crisis.

One developer operating in the area reported that sales were down from around seven a week in 2005 to around seven every three weeks, just two years later.

The situation was so severe at one point that some weeks saw more cancellations than sales. 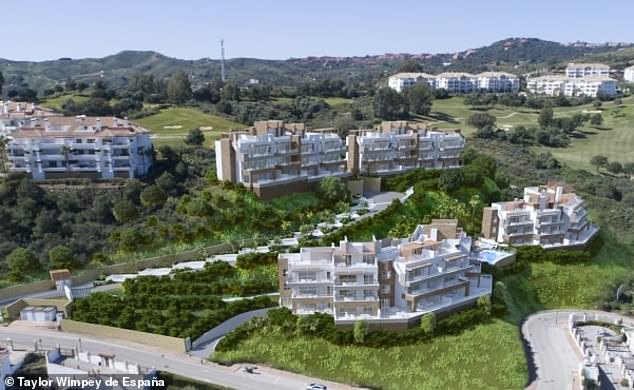 Fast forward a decade and the area is building again, with not only new homes, but new infrastructure that is helping to give the Costa del Sol a significant boost.

Developer Taylor Wimpey de España is one of the developers increasing the number of homes that it’s building in the Costa del Sol.

‘We never actually stopped building,’ says the group’s Marc Pritchard. ‘We built during the crisis and never stopped.’

One of the differences now compared to a decade ago is that its buyers are more international.

Mr Pritchard explained: ‘Our strongest buyers in the Costa del Sol are still from Britain but there are now more buyers from Belgium, Sweden, Germany and Norway. The market is more international.

‘We are selling similar amounts today as in 2005, but to a more international audience – more than 30 different nationalities.’

In 2005, 75 per cent of Taylor Wimpey’s Spanish sales were to Britons, the equivalent of five homes a week. It compares to 13 per cent in 2018 or around one home a week. 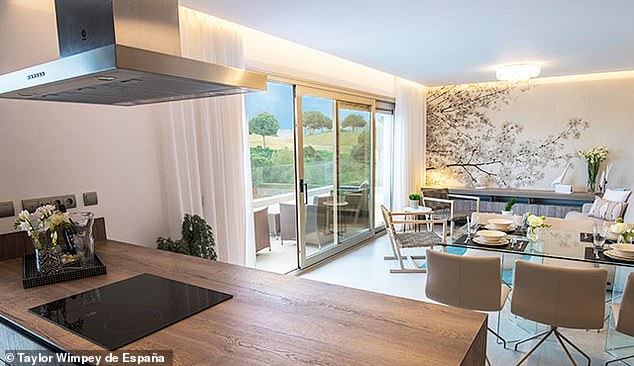 The development has two and three-bedroom flats, which will be finished next year

Taylor Wimpey is not the only one building in Spain, with international funds such as Blackstone and Värde Partners investing heavily, particularly in the past three years.

They are behind other developments in the area along the Spanish coastline around the city of Malaga and incorporating Marbella. 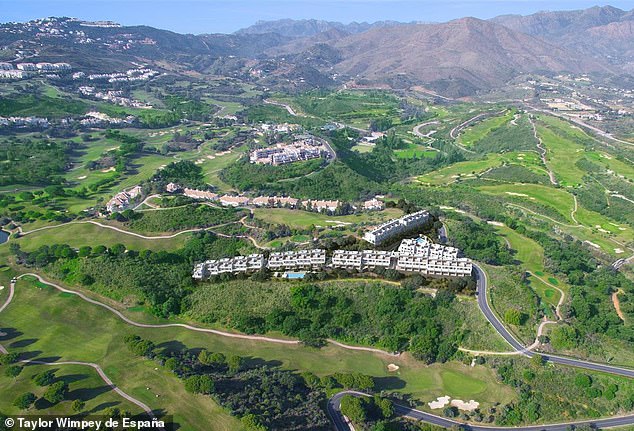 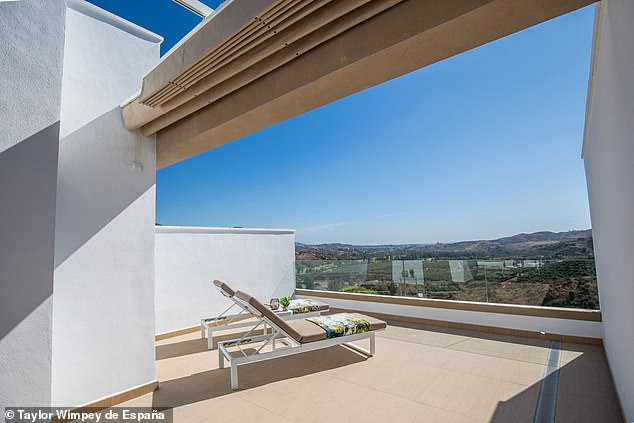 The Horizon Golf development consists of 55 townhouses with three-bedrooms

How much have prices in Spain risen in the past year?

Average property prices per square metre across Spain have increased by 5.7 per cent in the last 12 months, according to Spanish property website MiMove.

However, it is Marbella that stands out as the star performer in the Costa del Sol, MiMove said. 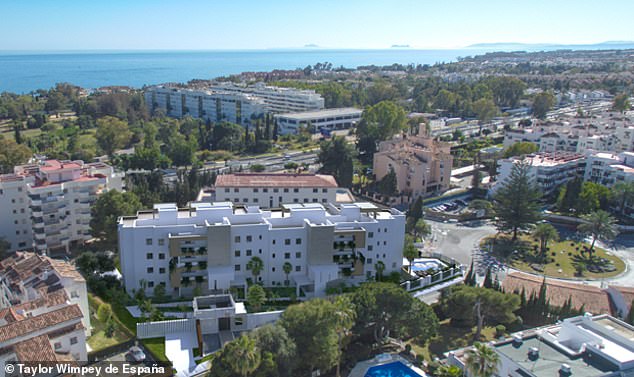 House prices in Marbella, Spain, have risen 11% on average since 2016 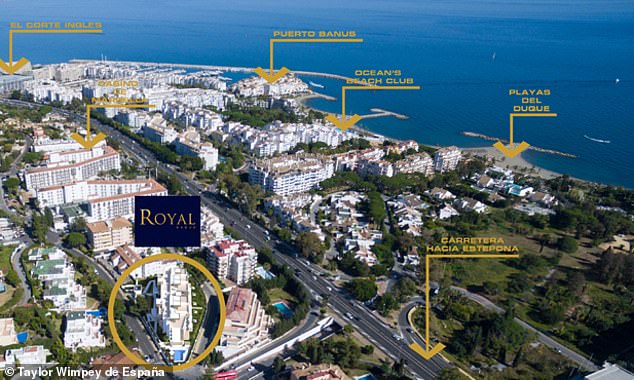 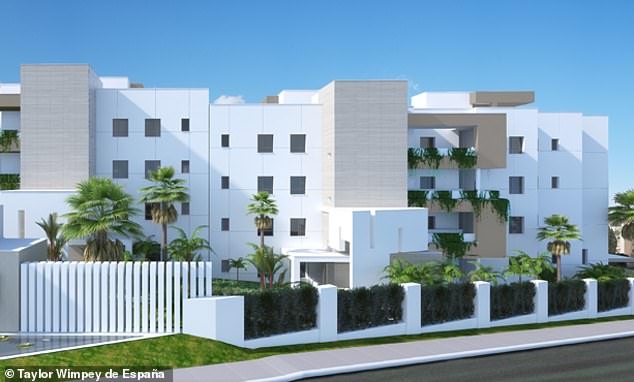 The Royal Banus development has a modern and minimalist exterior

Ola Lundell, chief executive of MiMove, said: ‘It is no secret that the Spanish property market took a battering when the global economy collapsed 11 years ago.

‘However, Spain’s perseverance to rise itself from the ashes has paid off, and since around 2012 we have started to see an increase in confidence from buyers and sellers as prices and transactions start to rise again.

‘This year has been no exception with figures improving substantially across most of Spain’s regions.

‘No doubt the uncertainty of Brexit and a poor exchange rate has had an impact on British buyers, but Spain remains the top place to buy abroad.’

What are British buyers in Spain looking for?

Buyers are looking for modern, minimalist designs with a glass and white exterior, and an open-plan interior with two or three bedrooms, according to Taylor Wimpey’s Mr Pritchard.

‘Earth colours no longer work. And people don’t want traditional Spanish balustrades. They want something modern and open-plan,’ he said. 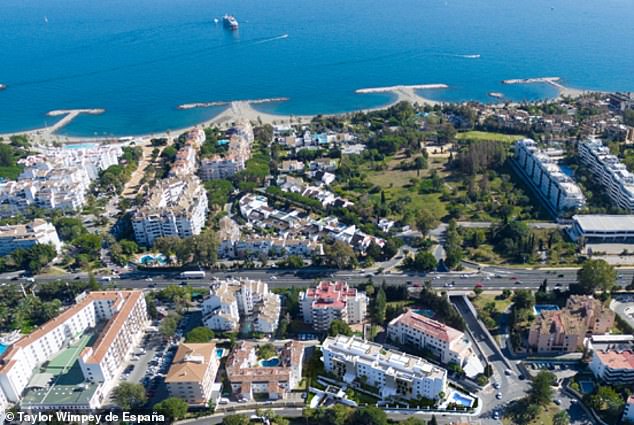 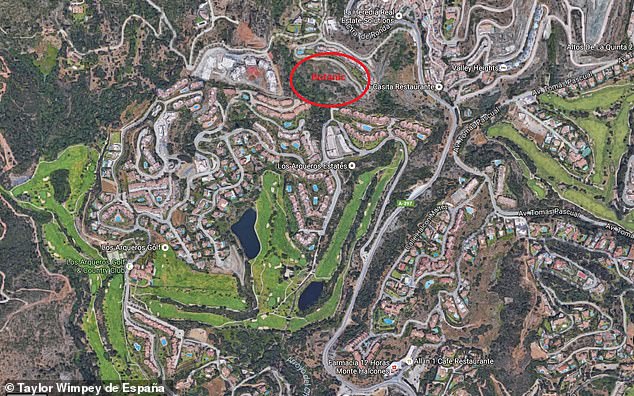 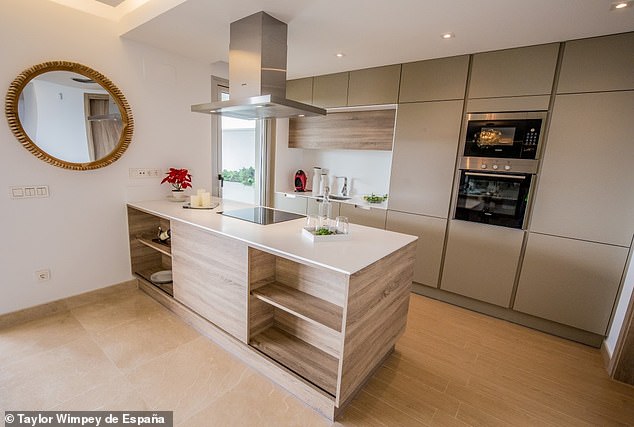 The apartments at Botanic come with designed kitchens and sleek finishes 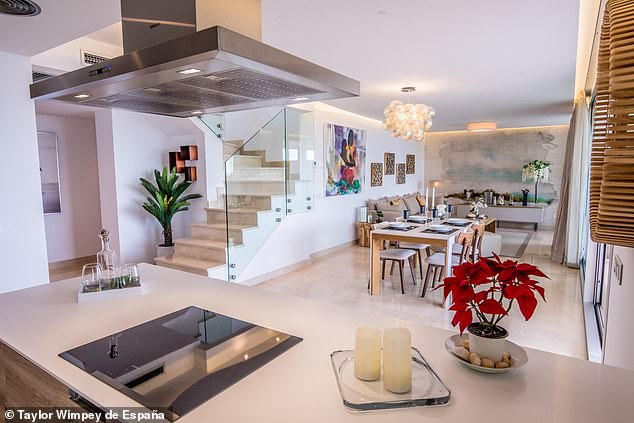 There is air-conditioning throughout the apartments at the Botanic development 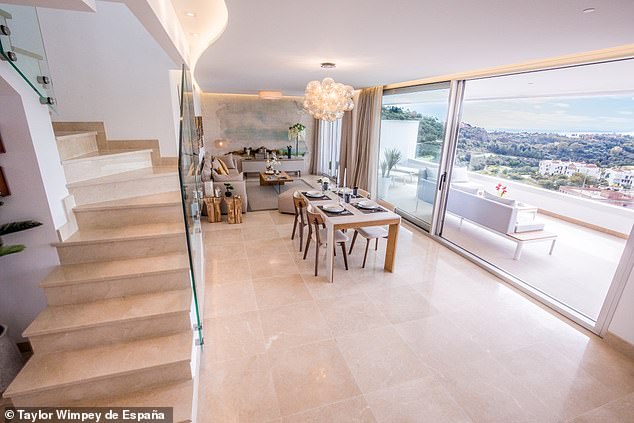 This type of design is responsible for all of Taylor Wimpey’s latest developments around Marbella.

These include a new development called Grand View at La Cala Golf on the Costa del Sol, which is around 15 minutes from Marbella.

The price of the apartments for sale in Spain do not include VAT.

VAT in Spain is 10 per cent of the selling price.

This needs to be added to the price, along with notary fees, town hall registration fees and legal feels.

Including VAT, this equates to around 13 per cent on top of the purchase price.

For those looking for a location in the heart of the town, Taylor Wimpey is building 24 two-and three-bedroom flats in Puerto Banus, with a communal outdoor swimming pool and prices starting at €490,000 – around £433,000 – plus VAT.

This development is attracting investors buying for the rental market and for those seeking to obtain a golden visa.

Golden visas in Spain are available for those investing €500,000 in property.

And what about non-golfers? For outstanding sea views and set in stunning grounds that include pine trees and Himalayan cedars, Taylor Wimpey’s new development called Botanic is just a five minute drive from San Pedro de Alcantara.

San Pedro has recently seen a huge underground carriageway built that has seen surrounding prices surge in the past few years.

For those with a smaller budget, the group’s new Green Golf development at Estepona, where prices are lower as it is further along the coast.

Taylor Wimpey bought the plot before the crisis and is only now building again on the site, with prices starting at €299,000 plus VAT – around £264,000.